What do volcanic eruptions and invasive wasps have in common?

A recent study estimates that introduced Vespula wasps cost the New Zealand economy at least $130 million per year – equivalent to the estimated cost of the 1995-97 Ruapehu eruption.

The primary sector, particularly farming, beekeeping, horticulture and forestry bear the brunt of the economic impacts of wasps, but an already stretched health sector also shares the burden. The study did not attempt to quantify the economic impact on the tourism sector, although we know that encountering high densities of wasps puts off many people from outdoor recreation. Vespula wasps are invasive in many parts of the world, but New Zealand has the highest recorded density, not exactly our greatest claim to fame. However, I argue that the ecological impacts of wasps are far more damaging than the economic costs.

New Zealand has no native social wasps or bees, so the arrival of two species of Vespula wasp introduced a novel functional group into our ecosystems. I have spent many years studying the impact and control of wasps in South Island forests infested with endemic, honeydew-producing scale insects. Sugar-coated trees are surely a wasp’s idea of heaven. Native birds, lizards, insects and microbes all feed on honeydew, so when wasps monopolise the resource, many native species miss out. Additionally, wasps are predators of a wide range of invertebrates, attack nestling birds, and disrupt nutrient cycling. 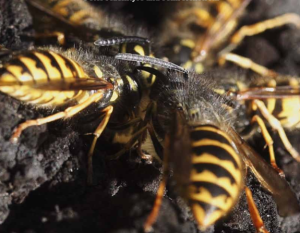 Vespula wasps feed by trophallaxis – food gets passed around the colony making it a good target for control.

Social insects are notoriously difficult to control – the social structure of colonies, high reproductive rates and dispersal ability makes management at the population level difficult. Biological control of wasps using Ichneumonid parasitoids has not been successful, although there are other potential agents such as Pneumolaelaps mites which might be more effective. Poison baiting using fipronil is very effective, but currently not commercially available. There are other options for wasp control such as pheromones or ‘RNA interference’ technology. Some of these may be developed as part of New Zealand’s Biological Heritage National Science Challenge, but don’t hold your breath for a single silver bullet arriving in time for next summer.

Unlike unpredictable, sporadic volcanic eruptions, I can reliably predict that for now there will be ongoing economic and ecological harm from Vespula wasps in those parts of the world they have invaded.

Dr Jacqueline Beggs is an Associate Professor in Ecology, School of Biological Sciences, University of Auckland.  She has failed to focus on a single topic; her research covers everything from impact and control of introduced invertebrates, to assessing the role of dung beetles and native bees in ecosystem function, and the recovery of grey faced petrels on a restoration island. 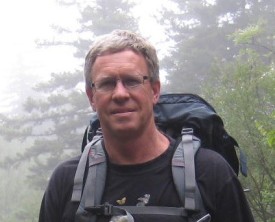 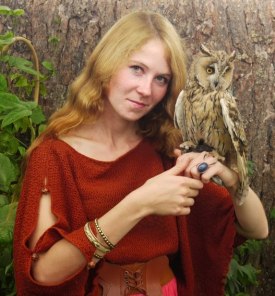